Interest rates can move higher; however, higher does not mean high. There are a great many market forces pushing and pulling on interest rates. The massive market forces being generated by the following should not be taken lightly, as they all represent formidable deterrents to higher interest rates:

We unhurriedly creep toward the end of back-to-back unpleasant years. One of the distressing hurdles we’re yet to face is the annual interest rate forecasting when nearly all experts will profoundly foretell that next year will end with much higher interest rates. After all, they may get a pass this year as it’s in vogue to consent with a prevalent verdict for enduring inflation, consequently acclimating amid an increasing interest rate environment. I’m not predicting this story’s conclusion, but I am submitting some compelling facts that cannot be ignored as they signify more than just a headwind to higher interest rates but akin to persisting tenacious gusts of wind warding off departure from what has been decades of a declining and sustained low rate environment.

Not all central banks are commissioned with exactly the same duties, but like the Fed, many are charged with maintaining market stability, controlled inflation and maximum employment. Since the Great Recession of 2007-2009, the central banks have ballooned their balance sheets, subsequently injecting the world’s economy with trillions of dollars. When you combine just four major central bank balance sheets -- the Fed, the European Central Bank, The People’s Bank of China and the Bank of Japan -- they have tallied over $30.8 trillion added onto their combined balance sheets. World governments are incentivized to keep interest rates down as their debt levels have ballooned to levels never before seen.

It can be accurate to describe and categorize the markets as globally influenced. Interest rate disparity crept into the markets as far back as seven to ten years ago after the Great Recession. Since then, the United States interest rate environment has run higher than nearly all European and Asian markets. In historic periods it is conventional to see stronger more reliable credits yield lower rates versus substandard or weaker credits. Yet, countries like Japan, Greece and Spain have consistently exhibited lower interest rates than the United States. Many European and Asian markets have run interest rates so low that global negative yielding debt has not only surfaced but increased to as high as $18.3 trillion (currently ~$12.9 trillion). As long as interest rates remain higher in the U.S., it is likely that foreign entities will continue to participate in the U.S. bond market which represents safety and stability as well as higher returns. This in itself is a strong headwind to higher interest rates (as increased demand will keep prices higher/yields lower), thus keeping the disparity between foreign sovereign interest rates and U.S. interest rates from drifting too far apart. 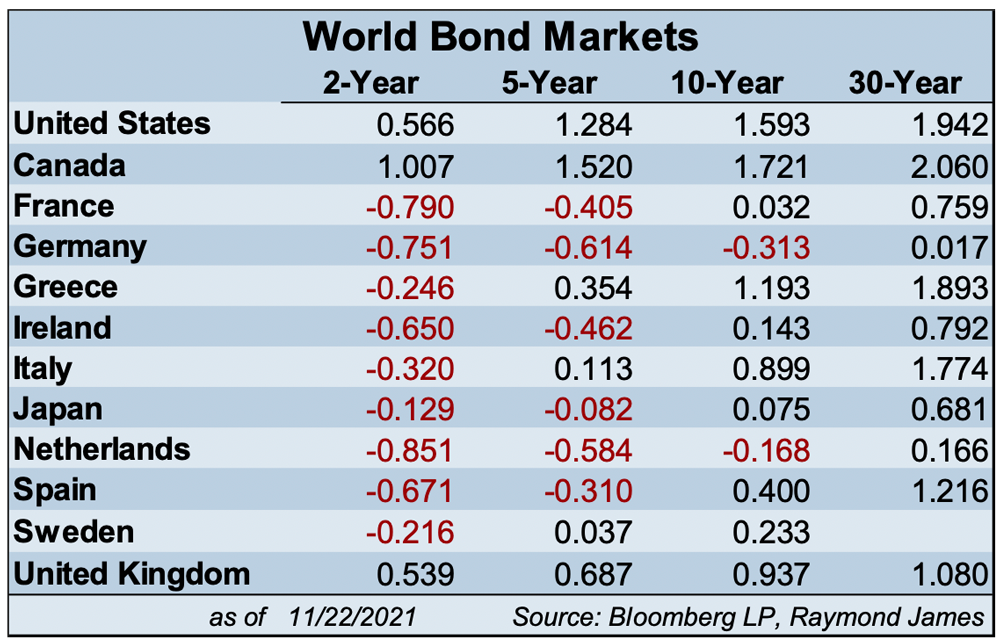 Demographics are seldom mingled into economic discussions, leaving out a pertinent impactful attribute. There are many demographic characteristics to consider although for the moment, let’s reflect on age and net worth. Over the last several decades, U.S. individual net worths have increased and at a more elevated pace versus inflation. Diving into the numbers from 2010 to the present discloses the facts: PCE (inflation) averaged 1.69%, wages averaged +2.7%, housing averaged +4.5%, S&P +15.2%, 10yr Bond +7.2%. Another way to look at this is to say that in general, individuals have benefitted from an increased standard of living and in general, higher amounts of disposable income. Rather than get tangled in decades of data, the adjacent chart isolates the last decade. In each of the corresponding age categories, net worth has increased from 76% to 161% over the last 10+ years. The numbers advocate the ease at which in a consumer-driven economy such as the U.S., supporting pre-pandemic Gross National Product (GDP) statistics can rationally be projected with additional proposed growth.

The actual age bucket count might also matter. Note that the <40 and 40-54 year old groups were +4.5% and -6.3% respectively, while the two older age ranges increased by 23.4% and 33% respectively by contrast. Consumers under 55 years old are more likely to buy homes, purchase furnishings, put children through school, build wardrobes, etc. Consumers over 55 years old often own their homes, already put kids through school and have their houses fully furnished. When reaching retirement age, a pattern to save and invest often replaces spending. Additionally, note that 69.3% of the nation’s wealth is in the hands of those over 55 years in age. The majority of the nation’s net worth is tilted toward those (+55yr olds) more likely to save and invest. This bulk of money competing for investments represents yet another potential headwind to higher interest rates. 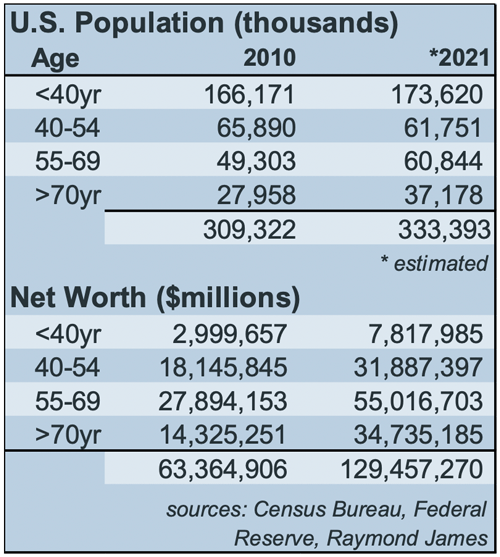 There are other headwinds to higher interest rates, not the least of which is technology. Technology can combat inflation head-to-head. It is easy to visualize smartphones, a singular powerful product that replaced: a phone, an answering machine, a voice recorder, a calculator, a camera, a cam-recorder, a portable music player, an internet search device, a diary, a flashlight, paper books, a GPS, a scanner, a compass, a game console controller, an alarm clock, a timer, a calendar, a notepad, a newspaper, a movie screen, an email center, etc. Technology that is less obvious can include virtual experience and digital consumption. Think of an hour of play on a video game. Other than the initial expense, it is virtually free entertainment as opposed to going to a bowling alley, a sporting event or a movie theater. It requires little capital or operating expenses. It doesn’t show up as productivity. Although it is easy to shake off a mindless video game, think how virtual consumption may inundate health care, education or the artificial intelligence world. Technology will continue to provide potential advances in productivity, lowering capital outlays and increasing outputs which combats inflation and may contribute to the attributes that foster lower interest rates.

When the next wave of forecasts arrives, consider these influential deterrents to higher interest rates. I am not suggesting that these headwinds, even in combination, will keep interest rates near historic lows; however, they will play a role in any degree of change in interest rates. The take-away for fixed income investors is that it is important to stop guessing interest rate direction or timing the market and value instead, time in the market. Bonds, whether we are in a one percent or ten percent interest rate market, continue to perform the primary purpose of protecting principal for many investors. In other words, bonds won’t necessarily make you wealthy, they may however assist in keeping you wealthy. Remember, interest rate headwinds are still gusting in our markets.

The author of this material is a Trader in the Fixed Income Department of Raymond James & Associates (RJA), and is not an Analyst. Any opinions expressed may differ from opinions expressed by other departments of RJA, including our Equity Research Department, and are subject to change without notice. The data and information contained herein was obtained from sources considered to be reliable, but RJA does not guarantee its accuracy and/or completeness. Neither the information nor any opinions expressed constitute a solicitation for the purchase or sale of any security referred to herein. This material may include analysis of sectors, securities and/or derivatives that RJA may have positions, long or short, held proprietarily. RJA or its affiliates may execute transactions which may not be consistent with the report’s conclusions. RJA may also have performed investment banking services for the issuers of such securities. Investors should discuss the risks inherent in bonds with their Raymond James Financial Advisor. Risks include, but are not limited to, changes in interest rates, liquidity, credit quality, volatility, and duration. Past performance is no assurance of future results.

Stocks are appropriate for investors who have a more aggressive investment objective, since they fluctuate in value and involve risks including the possible loss of capital. Dividends will fluctuate and are not guaranteed. Prior to making an investment decision, please consult with your financial advisor about your individual situation.

what can we do for you?

Raymond James financial advisors may only conduct business with residents of the states and/or jurisdictions for which they are properly registered. Therefore, a response to a request for information may be delayed. Please note that not all of the investments and services mentioned are available in every state. Investors outside of the United States are subject to securities and tax regulations within their applicable jurisdictions that are not addressed on this site. Contact your local Raymond James office for information and availability.